The Mauve Factor test (formerly known as Kryptopyrroles) is a urinary test which analyses the level of HPL, a neurotoxic substance found in high levels in
schizophrenia, autism, ADHD, alcoholism, anxiety, violent offenders and other mental health disorders. High levels of the Mauve Factor is associated with vitamin B6 and zinc deficiencies, and treatment with these nutrients results in symptom resolution, as well as lowered levels of the urinary mauve factor.

The Mauve Factor (Malvaria), also known as hydroxyhemopyrrolin-2-one (HPL), kryptopyrrole and urinary pyrrole, was first reported in 1961. It was found that high urinary levels of Mauve were present in a proportion (up to 80%) of schizophrenic patients. On remission, the level of Mauve in these
individuals reduced to normal amounts. Subsequent studies have shown that high-Mauve is not specific to schizophrenia, but is also elevated in alcoholism, autism, criminal behaviour, depression, Down syndrome and many other mental health disorders.

The Mauve Factor and Nutrient Deficiencies<br />

Pfeiffer, who was one of the initial investigators of Mauve, treated more than one thousand highMauve patients with vitamin B6 and zinc with very positive results. Symptom improvement with these supplements can be experienced in patients in as little as two days and Mauve levels have been
observed to decrease by as much as 50% after 1 month of treatment. However, discontinuation of the supplement regime may result in deterioration of the patient in as little as 48 hours. Correlation studies have provided evidence of zinc and functional vitamin B6 deficiencies in high-Mauve patients,
supporting the use of these nutrients in the treatment of Mauve. Many of the symptoms observed in high-Mauve patients can be attributed to zinc, vitamin B6 and biotin deficiencies. Furthermore, many neurotransmitters such as serotonin, dopamine and gamma aminobutyric acid (GABA) require vitamin B6 and/or zinc for their production. Therefore it is not surprising that individuals with high-Mauve levels, and therefore vitamins B6 and zinc deficiencies, may have neurological imbalances. 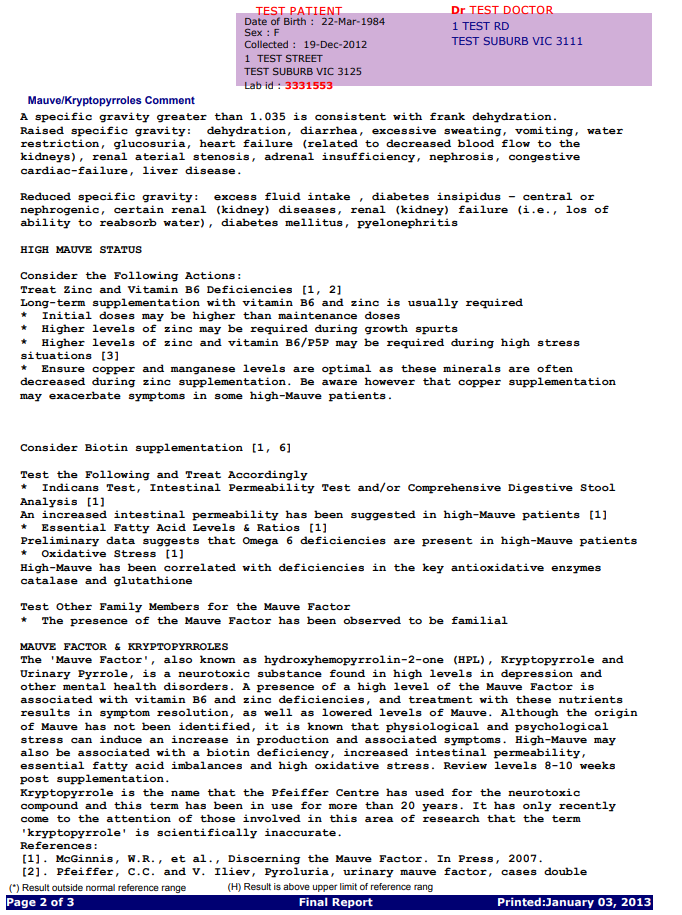 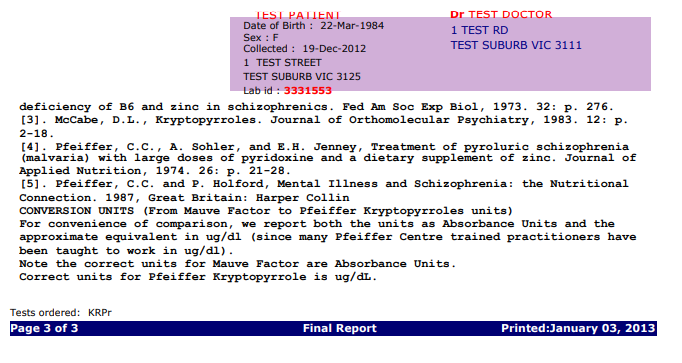